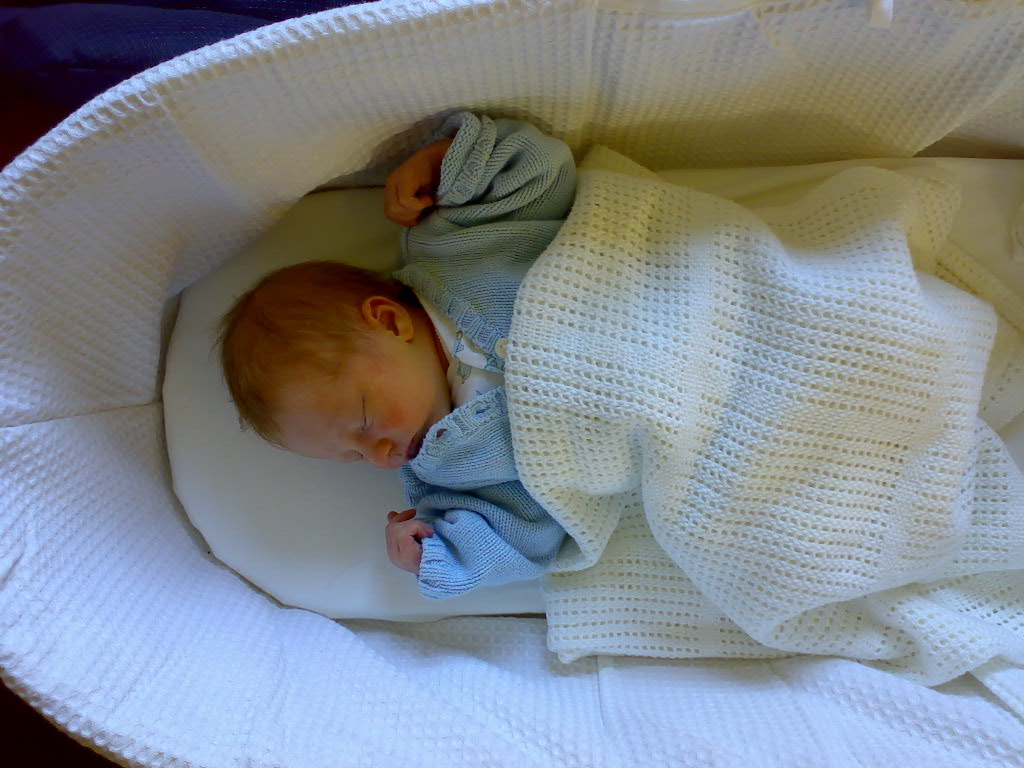 So, last Monday, right in the middle of University Challenge, it became apparent that our second child (sex then unknown) was announcing his/her intention to arrive a week early. After a certain amount of drama, including my forgetting how to drive a car and repeatedly stalling at traffic lights, and a record-breaking drive by my brilliant parents from Portsmouth to Frome to come and take care of number-one-son (Joe, 3), Helen delivered a little boy at 01:08 on Tuesday. [continues...]

In Facebook, Ross Gardler asks: What features of Facebook make you come back day after day? The interesting thing about Facebook for me is to see how far I am dragged into using it by the groundswell of public enthusiasm before the next, more compelling thing comes along and we find this closed system is no use anymore. A bit acerbic perhaps. I guess what I'm trying to say is that I'm using Facebook in an experimental way, and one prerequisite for a useful experiment would seem to be to use it regularly. [continues...]

Brian alerted me to a post by Dave Winer, called Facebook is opening up. It's true! Some Facebook content is now easily available as RSS feeds: for example a feed of items which have been posted by my 'friends'. Note how you don't need to be logged in to Facebook (or have an account for that matter) to use this. Dave reports that, in fact, these feeds have been available for some time. [continues...]

Interestingly, I've just discovered that if you use the Twitter application in Facebook, then you can, under certain circumstances, see what your Facebook friends are 'tweeting' even if you aren't 'following' them in Twitter. 'Tweet' is becoming common parlance for a message sent/received via the Twitter system. This is how I think it works (caveat: some of this is conjecture based on flimsy evidence, but however it works, it raises interesting questions): I have a social network on Twitter, which means I've registered my interest in the tweets of some users, and some users have registered interest in my tweets. [continues...]

Quite a bit of excitement has been generated by Blaise Aguera y Arcas's Jaw-dropping Photosynth demo. The demo starts with a quick run-through of the capabilities of Seadragon, now owned by Microsoft, and then follows this up with a demonstration of Photosynth. I think it's rare to hear a round of applause in the middle of a technology demonstration.... Photosynth is the real jaw-dropper, and I'm inspired by the promise of being able to construct elaborate 3D models of spaces from the aggregation of many, tagged, 2D images in systems like Flickr. [continues...]

I came across this quote: The coolest thing to do with your data will be thought of by someone else attributed to Rufus Pollack, in a in a post on the Talis blog, Nodalities. Absolutely, couldn't agree more. The point is not so much whether this statement might be true or not, so much as what it does to your thinking and planning if you decide to take it as an article of faith. [continues...]

Tagging: Are we in the Trough of Disillusionment?

An interesting post from Philipp Keller on Tag history and gartners hype cycles from back in May of this year which I missed first time around. Now part of me thinks it must be possible to plot just about anything on the Gartner Hype Cycle, but it can be a useful tool for provoking reflection and discussion.Note how Philipp indicates that we now find ourselves in the Trough of Disillusionment in 2007. [continues...]

On the subject of the e-Framework for Education and Research, Andy Powell, in eFoundations, asks: ...does the e-Framework support the Web (again, read Web 2.0 if you like) mindset, does it fight against it, or is it neutral? Although the e-Framework is careful to position itself as technology-neutral it is, nonetheless, somewhat associated with WS-* in some quarters. This may be partly because the e-Framework was born partly out of a perceived need for our communities to engage with SOA. [continues...]

The 6 billion Others project by Yann Arthus-Bertrand: In 2008 you will be able to listen to the thousands of testimonies which have been collected, and add your own testimony to the site. Simple idea, neat & stylish execution, powerful impact. The system is built on Flash which works very well for the actual gallery of testimonies (unfortunately most of the rest of the site also runs on Flash which seems a little unnecessary, but this is a quibble). [continues...]

Playing in the sandpit, while the novelty lasts

My parents recently bought my son a sandpit and a couple of sacks of sand to go in it. He loves it (although his enjoyment has been curtailed by the UK recently developing a monsoon-like climate of continuous rain). He'll generally sit outside of it, playing with the toys and sand inside, or sometimes he'll just climb right in. Either way, the rule is the same. The sandpit is a semi-closed system - no sand is allowed to escape the confines of the sandpit, and only some compatible (i. [continues...]

At the Glastonbury Festival in the UK this year, the big story was not so much the performances as the weather. In particular it was the mud which featured heavily, slowing down the processions of bedraggled festival goers as they migrated from one stage to the next. On Saturday, I visited Secondfest after seeing the publicity in the Guardian newspaper. This was a virtual festival, hosted in SecondLife and sponsored by the Guardian and by Intel. [continues...]

Web 2.0 tools allow the individual to share their interests with others. If someone is an active user of Web 2.0 services, blogging, sharing photos etc, then we can begin to build some sort of a picture of that person's interests. I've been thinking about how one might extend this idea to _groups _of people, especially groups with some common interest. Such groups are sometimes called communities of practice. By definition, individuals within a community of practice already know _some _of the interests of the others in the group - these are the interests which bind them together. [continues...]

Good to see that 37signals have adopted (optional) OpenID support for Basecamp. I was already using Basecamp with the older, local user account credentials, but the system allowed me to swap to using my OpenID very easily. Good work, as ever, by 37signals. However, I can't help thinking that is only half the story. The 'ID' in OpenID is, at one level, about identity as in 'Identity Card'. But my OpenID is also an identifier, which is fundamental in the context of the web. [continues...]

Joe Gregorio offers a detailed example of 'RESTifying' an existing, complex application. His post concentrates on dealing with 'collections' in particular. My experience with applying a REST approach to web application design is that it has worked well with some simple applications, but I have tended to shy away from this approach for more complex solutions, believing that the effort of 'constraining' such applications into the REST approach might outweigh the benefits. [continues...]

I spent Wednesday at a small event called Open source community - friend or foe?, organised by OSS Watch to discuss strategies for developing communities around development projects. To quote from their website: OSS Watch promotes awareness and understanding of the legal, social, technical and economic issues that arise when educational institutions engage with free and open source software. It does this by providing unbiased advice and guidance to UK higher and further education. [continues...]

A seminar on, and in, Second Life

Today I briefly attended a follow up to the Eduserv Symposium, Virtual Worlds, Real Learning, Revisited which was an entirely 'virtual' event conducted in Second Life (SL). My attendance was cut short by an incident involving a laptop and a three-year old upon which I won't elaborate.... I did manage to rejoin the event towards the end. The event today was, essentially, a seminar, with a 5 or 6 'panelists' and a varying number of audience members (maybe peaked at around 25 - difficult for me to say). [continues...]

Breakthroughs Happen in a Social Context

This post from Terry Frazier connects neatly with something I've been wondering about a fair amount lately: how to judge when to pause and think about something deeply, and when to dive in and see where your momentum and the 'current' take you. Terry, describing a talk given by Lisa Haneberg, says: Breakthroughs happen in a social context – If you aren’t out actively promoting your goal or idea – discussing it regularly with friends, colleagues, and strangers and sharing your challenges, achievements, and objectives – you aren’t going to make any breakthroughs. [continues...]

There follows a pretty self-indulgent exercise in mixing metaphors and stretching them beyond breaking point. I'm sure I'm not the first person who has speculated about similarities between Web 2.0 and Punk. I've mused over this with Liz and Brian at UKOLN for example. Brian and I have pushed the 'music-genre-as-analogy-for-what-we-do' a fair bit (Brian even blogged about being a Dedicated Follower of Fashion getting cited in the Wikipedia entry for this song title in the process! [continues...]

Interoperability is not enough

The Higher Education sector has invested a lot of time and effort into the development and adoption of open standards. Interoperability has, for some time, been one of the key design-principles in the development of new software and services. Developers working in projects funded by JISC for example are, necessarily, at pains to demonstrate that their solution uses open standards where possible in order to ensure interoperability. Would I be amiss if I suggested that there are some who have been satisfied to leave it there? [continues...]

(Note - For the purposes of this post, I'll be using the quasi-conventional shorthand of RL to mean 'real life', as opposed to SL meaning 'Second Life'.) Just got back from the Eduserv Symposium 2007 in London. An interesting event which, however you cut it, became essentially a review of the relevance or otherwise of Second Life to education, despite the title of the conference suggesting virtual worlds in general. [continues...]